It's important to understand that the states above are just a list. It helps to consider all the possible states a game can be in, and how the game moves from one state to another. Sometimes it helps to draw out the states in a diagram. Here is a diagram I drew to show the logic of the states: 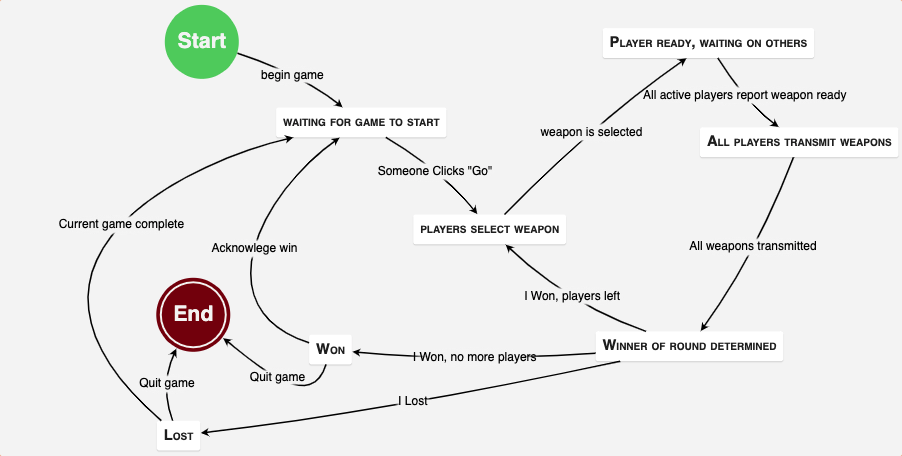 Our job is to implement these states. To do this we will implement a very common design for games, which is called a state machine. A state machine is very simple to describe, and very useful for implementing all kinds of processes. In code, we use an enum to represent the states. An enum is a special type used to take on one of several values of a given type. You have already used enums in Raylib. The Colors enum for example is a list of predefined Color structs. Defining an enum is pretty easy:

Now the type GameState is usable just like an integer, and can have one of 3 values, GameState.Start, GameState.Playing, or GameState.GameOver. You can add as many states as you need.

To handle what to do at each state, we need some input. Something has to change either by the player, or by a timer, or a message received, or something, that moves the current game state to another state. The new state is waited on until something else happens. It is totally up to you what states you want to define, and how the game moves from one state to the next. Each of these moves is called a state transition.

For an exercise before the real thing, let's implement a simple state machine. In the class, we will implement the real state machine, so it will be good to have some practice on this. Here is some starting code, including a state:

Imagine this is a combination lock, with 3 dials (the combination is 1 2 3, you may want to change that). But we want to give hints to the user that they completed each number. So here's what the code should do:

Each of these things should be done in the loop, and the next step should be done after looping again. Why do we do this instead of just handling the next state? Because in a real game, you need to handle other things in the loop -- updating the display, reading network data, etc. You handle one thing, update the state, and then let the loop handle the next thing.

For the next class, we will be doing a very similar thing with the states above. If you haven't constructed the code yet from the discord messages, here is the whole starting point. Everyone get this code in their visual studio code, and have it running so we can work on it. If you need help with getting it running, let me know.